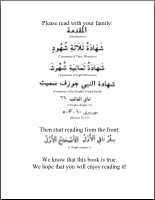 Download the Book of Mormon Arabic Suggested Readings List.
Posted by Josh Long at 1:23 AM No comments: